By now you have probably heard about the historic “Injustice and Health” Teach-In that was held at UCSF near the end of February. Because it was a momentous occasion that raised many important issues, I have decided to present Addressing Health Disparities and Injustice as my only story in this month’s Expresso.

While the Teach-In was geared for students, it carried many important messages for all of us at UCSF, so my request – really, a strong recommendation – is that you find the time to experience the full event, since it was video captured. I know this is asking a lot, it’s a little over two hours long, but consider screening it instead of the next movie you might rent on Netflix. It’s important.

If your time is tight, I have highlighted selected video clips in the story, and you also can access an excellent Teach-In recap on UCSF.edu.

So, please read the Expresso story, watch the entire Teach-In video or just the clips, and keep the conversation going. The path to solving the problems of racism and health disparities is very, very long, but the only way we’ll get there is by understanding the issues – and taking action.

As always, please share your thoughts with me at [email protected].

Our motto and mission at UCSF is advancing health worldwide, which implies that we cannot be satisfied in our pursuit until we ensure that good health is accessible to all. To emphasize our commitment to this goal, we decided to host a 1960s-style Teach-In to spotlight the issues of health disparity and injustice and bring the UCSF community together around this challenge. (UCSF took a similar approach in 2007 that highlighted and discussed the health effects of the Iraq War.)

Many events, movements, and initiatives led to this most recent Teach-In. Spurred by the deaths of young black men like Michael Brown and Eric Garner at the hands of police, UCSF students organized “WhiteCoats4BlackLives” in December 2014. In his 2015 State of the University address, Chancellor Sam Hawgood explicitly identified “Equity and Inclusion” as one of the four pillars, or strategic priorities, for UCSF. In collaboration with the EVCP and Chancellor’s offices, Alejandra Rincón, PhD, and Chief of Staff for the Office of Diversity and Outreach (ODO) proposed and produced this event, designed to raise consciousness about the impact of racism on health and healthcare.

Most classes were suspended so that students could attend. Cole Hall was secured as the main venue, where close to 400 people gathered. Coordination with Educational Technology Services enabled an additional 1,463 people to participate via simulcasts throughout other UCSF sites. And an army of volunteers was assembled and turned out to support the event. It was truly a community effort.

Soledad O’Brien, former CNN reporter and our keynote speaker, opened the discussion by talking about her realization that she needed to become a TV producer to be in a position of power in order to leverage voices and perspectives and influence how stories were chosen and told. She then continued by showing clips from her powerful documentary, “Black in America,” and shared insights about the toll of inequity from her coverage of Hurricane Katrina as well as from her personal life. Throughout the presentation, she described the challenges she faced as a multiracial woman of color and her witness to the significant impact of racism on access to decent food and health care. One story about a physician in Harlem spoke to the lack of trust in institutions to provide quality health care and the need for creative approaches to rebuild patient confidence, such as reaching out to individuals on the street level “where they work, live, and play.” Another story was from a radio talk show host who remembers a listener saying that “…she can find a gun in her neighborhood faster than she can find a tomato.”

Following Soledad’s talk, an impressive panel brought the issues home. We have so many qualified people at UCSF, and it was difficult to select only six individuals. The group reminds me of one of the many reasons I am so proud to be part of UCSF:

I wish I had the time and space to share all of my reactions and learnings from the program, instead I’ll give you a few highlights that resonated with me:

As the person responsible for the event and keeping its momentum, Alejandra sees the Teach-In as an important step by one institution, chipping away at generations of disparities. “There is a bigger dialog to be had about how these conversations translate into actions and changes,” she told me. Starting with the beautiful essay she posted reflecting on the experience, the ODO, with support from the EVCP office, will continue to move the issue forward with other events, and with efforts to extend its work for justice throughout all of UCSF.

It’s important to have these conversations, and it’s just as important to keep the momentum going. Days after, I was still thinking about everything I heard, and a few panelists made themselves available for a post-event talk for Expresso. They were, above all, hopeful.

Finding hope despite discouraging statistics was one of the themes during the Teach-In. “Hopelessness doesn’t solve anything,” Soledad said. “It’s a useless emotion. You’ve got to be hopeful.”

I opened my remarks at the Teach-In with one of my favorite quotes from Dr. Martin Luther King, Jr.: “The arc of the moral universe is long, but it bends toward justice.” It may take us a long time to achieve true justice in health care – and the rest of society – but all of us at UCSF can, and will, move that arc along. 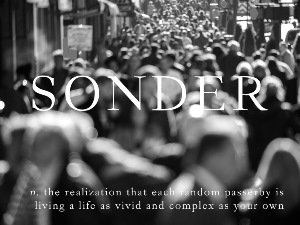 One evening my daughter's boyfriend Zach asked me: “Hey Dan, have you ever heard of the word sonder?” Never had. Zach said I’d really like it and pulled out his iPhone to read the definition from the Dictionary of Obscure Sorrows. It’s been with me ever since:

sonder (n.): the realization that each random passerby is living a life as vivid and complex as your own - populated with their own ambitions, friends, routines, worries and inherited craziness - an epic story that continues invisibly around you like an anthill sprawling deep underground, with elaborate passageways to thousands of other lives that you’ll never know existed, in which you might appear only once, as an extra sipping coffee in the background, as a blur of traffic passing on the highway, as a lighted window at dusk.

And, here’s a video that builds on the word visually, although I think the written definition says it all!