The arrival of December offers me the opportunity to reflect on another year coming to a close. In retrospect, this one sure feels like the whole planet (or certainly our nation) turned upside down, and the craziness of the past week suggests there’s more to come. However, looking back at 2017 with a focus on our own UCSF community, I am reminded of the true goodness that exists in the world. Talk about hope for the future! I’ve got plenty of it, because UCSF exemplifies what is possible when remarkable people are enabled to pursue their dreams of making the world a better place.

Speaking of which, this month I’ll cover:

But before we say goodbye to 2017, take heed of instructions to complete your Duo two-factor authentication enrollment. To avoid disrupted access, VPN users must act by December 5 and remote Outlook web (email.ucsf.edu) users by December 12.

I also remind you that there is a significant movement taking place in regard to tax reform bills that could have an adverse impact on UCSF, our students, faculty, and staff. Consider participating in the phone bank mobilization efforts today, December 1, from 11 a.m.–2 p.m., at Mission Bay, Genentech Hall 2nd Floor Atrium and GEN-S271, and on Tuesday, December 5, from 12 noon–3 p.m., at the Parnassus Library, Rooms CL-213 and CL-214. Learn more about UCSF Advocacy initiatives online.

The holidays are upon us, and I send my best wishes to you and yours for a very peaceful season. I hope you can share in my optimism for the new year. Let me know how you’re feeling about 2017 – and your hopes and dreams for 2018 – by writing to me at [email protected].

Thinking Big, Aiming High: The visionaries, the compassionate, the advocates, the inspired

Imagine what UCSF could accomplish if money was no object. What then? How far could we reach if we could connect our world-renowned researchers and clinical faculty with individuals and organizations who are keen to help financially? I wrote about the efforts and impact of University Development and Alumni Relations (UDAR) in my June 2016 installment.

The reality is that funding is an issue – a big issue. Thankfully, we have tremendous relationships with individuals and foundations who are as dedicated to our core pillars of discovery, education, and patient care as we are. And on October 27 at his State of the University address, Chancellor Sam Hawgood, joined by Kirsten Bibbins-Domingo and Hana El-Samad, took us on a journey through UCSF: The Campaign, a $5 billion endeavor that will enable us to continue to think big and aim high. (If you missed it, you can watch the address online. The campaign also has its own website, with a number of compelling short videos.)

Yes, $5 billion – it’s a huge number. The good news is that during a quiet phase that began in 2013, we’ve already raised $3 billion. That figure counts some important gifts to the University that have already been announced. A stunning example is the $500 million gift UCSF received this year from the Helen Diller Foundation, the largest donation in UCSF history and one of the largest to any university. Faculty were instrumental in laying the groundwork for that gift, and the bulk of the gift will establish endowments in Helen Diller’s name to support UCSF faculty and students. But the $3 billion also includes many others that don’t get as much attention.

According to Associate Vice Chancellor, University Development Jennifer Arnett, “The goal of the campaign is not just to raise $5 billion. The goal is really to solve the grand challenges, the hard problems. We want to leverage everything that we have at UCSF to benefit discovery, care, education, and service.” Jennifer says that faculty will not only benefit from the campaign, but we also have a role in ensuring its success.

“At the highest level, the campaign aims to support discovery, apply discoveries to care for patients, and make sure everybody has access to what we know works. These three challenges essentially fit together as a wheel,” Jennifer says. “We look at faculty and students as being at the center of that wheel. There’s a big emphasis on people. And, our relentless pursuit of these grand challenges is driven by the financial support for the people who are at the center of – and make possible – all we accomplish.”

Faculty also have worked closely with the development team in designing the campaign and setting its priorities. Five faculty working groups spent time over the past fifteen months in developing the three main themes of the campaign. They all funnel into one major theme, as Jennifer notes: “We are best at solving the hardest problems.”

You can read about the three grand challenges (be sure to check out the related story), but here they are in a nutshell:

I couldn’t agree more. Let’s help the campaign help us – so that we, in turn, can help others. Spread the word!

Some people had the wrong impression because a part of the CCF – the retail sales unit – did shut down earlier this year. We know that represents a loss to some researchers, but we’ve taken many steps to make sure the transition was as seamless as possible with no impact on the availability of services.

Elizabeth Sinclair, executive director of UCSF’s Research Resource Program (RRP), tells an interesting history of the CCF, and some of it will sound familiar to anyone who’s followed the disruptions of the digital age. UCSF established the CCF forty-four years ago, with an original mandate to do tissue culture. As CCF made media for its own use, it also began selling that media to other researchers who needed it. And as it bought other items for its own use, it also began reselling those items on campus. Ultimately, as it grew, it split into three distinct entities: Tissue Culture, Media Production, and the Resale Unit.

Operation of the CCF had to be sustainable. But in recent years, the resale unit struggled to meet its expenses, as online competition grew and many researchers met their needs elsewhere. As such, we made the painful decision to shut it down, while maintaining the media production and tissue culture units.

The success and durability of media production and tissue culture reflect another familiar modern story: the rush to local, homemade quality items. Like an artisan bakery or a regional farm, UCSF researchers have said they prefer the cells and media that come from UCSF’s facilities. Amy Choi, media production supervisor, says, “People have told us they’re glad we stayed. They like our products because they’re freshly made, and they appreciate the consistency and fast fulfillment of custom made formulations.” For more details, check out the media production website.

Media is manufactured in our custom-built facility at MCB, and the unit has been working hard to change their business model since they can’t rely on the resale unit anymore to distribute media. They have now successfully implemented next day delivery service directly to researchers. It’s not quite the same as being able to run down to a store, like in the old days, but it’s still timely and convenient.

Similarly, Jennifer Page manages the newly formed Cell and Genome Engineering Core (CGEC) facility, which includes the tissue culture unit and is located in the old CCF space at Parnassus and Mission Bay. The team is still performing all the same tissue culture services. The facility stocks hundreds of cell lines, is trustworthy and much cheaper than other alternatives, and now has the capability for custom products, including gene knock-ins and knock-outs. Jenn is confident when she says, “Any cell lines you need, we can provide them for you.”

They’re even adding a repository for induced pluripotent stem cells (IPS), opening up several lines from the lab of Bruce Conklin in the Gladstone Institutes.

And Greg Macway, a director with Supply Chain Management, says a new service aims to replace some of the functionality of the resale unit. You can use BearBuy, our e-procurement system, and we’ve also set up freezers that operate like vending machines for the most commonly requested items. They’re a high-tech operation – you use your card to get the item you need, and it’s all tracked via RFID chips.

Greg worked with Brian Smith, our associate vice chancellor of Research Infrastructure and Operations, and established a Research Supply Chain Management Group to address any issues that come up in making sure researchers have the tools they need. If you have questions about how any of this works, please contact Greg, Amy, or Jenn, whose emails are all online.

Given the difficulties that emerged over the last few years, I hope you are finding that the new approach we are taking is meeting your needs. If not, please let me know!

From the Science March to the Nepali Climb Step: Clicks and tips

Do you remember the days when readership was measured in newspaper and magazine sales and subscriptions? These days, it’s still all about the numbers, but now measured in followers, likes, and clicks – all those online metrics.

Every month after I hit “send” on this newsletter, I get some valuable analytics back, revealing “unique opens” and “click activity.” My team keeps track of the numbers in an effort to make sure that the Expresso content resonates with you.

According to the numbers, the most popular topic in Expresso this year was May’s item on “The New and Awesome Parnassus,” indicating that our original campus still gets a lot of love from the UCSF community. While ongoing construction is evidence of our commitment to Parnassus, I’m super excited about the recent, clear commitment leadership has made to reimagine the campus and make it every bit as dynamic and beautiful as any in the country. Expect to hear a lot more from me about this in the coming year.

April’s item on “Showing up for Science” was also popular – no surprise, given the passion that we have for science and the threats that science is facing these days. Hundreds of UCSF community members turned out for marches in support of science, as well as for many other similar events. I’m gratified at the show of solidarity!

The responses to my Tip of the Month always make me smile. These are some of the most fun things I get to write. The tips that resonated the most reflect your love of getting outdoors as well as the attraction of contrarian thinking: September’s tip about the (spoiler alert) “backwards brain bicycle” video, and October’s tip about the Nepali climb step – a video I recorded starring my wife, associate professor Mylo Schaaf, showing a hiking technique common in the Himalayas and just as useful in the hills and mountains of California.

Every year is, like life itself, a mix of highs and lows, of triumphs and tragedies. In reflective moments, I often turn to poetry, and as I look back over 2017, I find it comforting to return to a poem I printed in the February Expresso, “Kindness,” by Naomi Shihab Nye.

Then it is only kindness… that raises its head
from the crowd of the world to say
It is I you have been looking for,
and then goes with you everywhere
like a shadow or a friend. 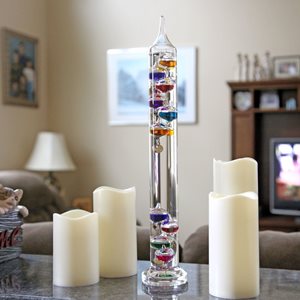 I am always looking for unusual holiday gifts, and this one might capture the fancy of someone in your orbit. It’s a “Galileo Thermometer,” which is based on the principle developed by Galileo Galilei that the density of a liquid changes as temperature changes. (Turns out he never made this contraption himself; scientists who followed him did.) I find these thermometers to be aesthetically beautiful and scientifically elegant, and although they are hardly a necessity for knowing the temperature, they are a centerpiece in any room. And they’re quite a deal for $22.99!