With the constant assault politics has on daily life and the understandable desire to tune out all the pundit noise, we must yet again steel ourselves and rally because this month we are entering the home stretch of another important election cycle. To that end, I am taking this opportunity to depart from the usual Expresso format and dedicate this entire issue towards urging all of you, regardless of political affiliation, to exercise your right to vote and even get involved in the process.

To start, voting is one of our most cherished rights and sacred responsibilities. Think of all the battles that people have waged to extend this right. According to the National Archives, for decades, “several generations of woman suffrage supporters lectured, wrote, marched, lobbied, and practiced civil disobedience” until the 19th Amendment became law in 1920. Young people were sent off to war, where they died by the thousands, until the passage of the 26th Amendment in 1971 gave them the right to vote. And civil rights marchers fought bravely and tirelessly for passage of the Voting Rights Act in 1965 – an effort that still requires vigilance today.

So, be sure you are registered – nearly 7 million Californians are not! If you’re one of them, you have until October 22 to register (information is on the California Secretary of State’s website.) And, while California shattered records in the 2016 presidential election, our state posted abysmal turnout in the 2014 midterm elections hitting a record low of 42 percent turnout. That just won’t cut it for this election when each and every congressional seat matters and the stakes are as high as they are now. So, if you prefer to vote by mail, then send your ballot early. If you prefer the hands-on voting experience, go to your local polling station with your fellow citizens. You can even be chauffeured to the polls – the ride-sharing service Lyft is giving free and discounted rides.

Perhaps you think your vote doesn’t count. Aha – but it does. Take a look at this sample of elections decided by extremely narrow margins.

Consider, also, that if you don’t live in a district with a competitive congressional race, perhaps a nearby district offers the ability to get involved in the process and make a difference. There are a number of opportunities for individuals to get involved by making phone calls, registering people, and canvassing door-to-door on behalf of candidates.

And, there is urgency beyond the congressional races. In California, voters will be deciding many important issues. For more in-depth information, the statewide ballot guide is online, and I also recommend you check out the guide from CALMatters, a nonpartisan, nonprofit journalism venture devoted to California. Depending on where you live, you could also have local ballot measures as well as important races for state legislators, county supervisors, BART board members, and other officials.

In short, each and every vote matters!

Now that you know how much your vote counts, we all must “do better” this election. The overall, nationwide outcome of this midterm election will be a critically important indicator of whether we the people approve or do not approve of the state of affairs in our country. Please don’t make excuses. Exercise your right. Be of service. Help everyone you know realize and fulfill their responsibility. Let’s not waste this opportunity!

And remember the next generation of voters. In 2016, UC entered into a Resolution to Support Full Implementation of the MOU Committing UC and the Secretary of State to Increase Student Voter Engagement. Be a good role model for our students by encouraging them to vote. Have a young person in your life approaching the age of majority? Share your experience with them and ask their opinion.

As attributed to Margaret Mead, “Never doubt that a small group of thoughtful, committed citizens can change the world. Indeed, it is the only thing that ever has.”

One final reminder: We are a public institution and there are legal restrictions on involvement in political campaign activities by the University of California or its personnel when acting in their professional capacities. I wrote about these in Expresso October 2016 and ask that you be mindful of the do’s and don’ts. (I revisited the topic in Expresso March 2017 to dispel some confusion at that time.)

In closing, here’s a very local opportunity to make your voice heard: the deadline to complete the “A Vision for Parnassus Heights” survey has been extended through October 5. Please voice your comments and ideas on the survey and let me know your thoughts about the upcoming elections at [email protected]. As always, I also welcome ideas for future editions of Expresso! 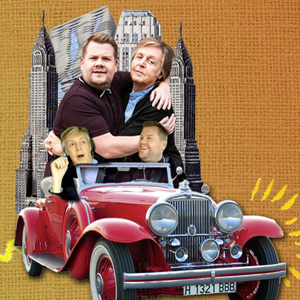 Seeing folks singing and bobbing their head to a favorite tune makes me smile. The Late Late Show with James Corden takes carpool karaoke to a whole new level with Paul McCartney. Hilarity ensues when Paul jumps in the car with James to spend a day driving around Liverpool, singing his biggest hits, exploring the city, visiting his childhood home, and performing songs in a local pub. I was reminded of the beauty of the lyrics and the seeming universality of the Beatles’ music and inspired by the joy that Paul brought to everyone who came in contact with him. I also was touched by Paul’s dream about his mother that inspired “Let It Be.” Check it out!!! (You’ll need to have 23 minutes free…)